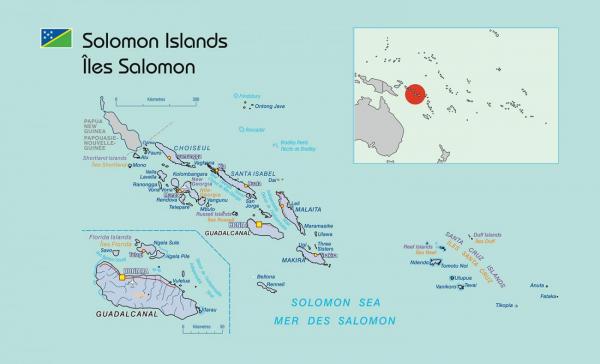 The Solomon Islands are an archipelago of approximately 1000 scattered islands in the Melanesian group of the western Pacific. The islands are mostly rugged and mountainous with some low-lying coral atolls. With a population of nearly 600,000 the bulk of the population are dependent on subsistence agriculture, fishing and forestry. Water resources availability in Solomon Islands varies considerably. It ranges from sizeable rivers to small streams from a high mountainous and dense rainforest islands to rainwater harvesting and thin fresh water lens of underground aquifers of the small low-lying atolls and islets. In 1986, ﬂooding claimed about 100 lives. In 1995, drought severely aﬀected most parts of the country causing severe food shortages. Improper development practices such as logging and the traditional slash-and-burn method of farming have gradually destroyed the quality and capacity of rivers and streams, threatening the availability water to many parts of the country.

With the increase in population, underground water sources are under threat due to human activities, saltwater intrusion and sea-level rise. From years of civil instability and economic collapse the Solomon Islands face many environmental challenges as they relate to water resources. Security of supply due to deteriorating water quality and reducing quantity from insufficient storage, leakage, in-efficiency and climate variability/changes are increasingly evident. Most water supplies have run-oﬀ type systems where small intakes are built at streams. The absence of dams (reservoirs) does not capture water during the wet seasons to supply during the drier periods. Groundwater resources sometimes supplement the supply but at a higher pumping cost. The lack of eﬀective liquid and solid waste management due pressure from urban planning and uncontrolled developments is exacerbated by the lack of maintenance of sewer infrastructure, no proper sewerage treatment and regulatory compliances results in raw sewerage disposals directly to rivers and coastal areas.

Governance issues are those of fragmented institutional arrangements that come with fragmented responsibilities with water resources and sanitation funding, development and management. Given the fragmented responsibilities, coordination continues to be a challenge across sectors. Additionally there is inadequate and outdated governance framework that prevents integration between all sectors for water and sanitation development. However, there are good examples of specific management plans under revised legislation that can be adopted for the WATSAN sector. The human resources needed to eﬀectively deliver water and sanitation developments continue to impede the workplans of responsible sectors. Staﬀ recruitment is restricted to budgetary allocations resulting in a freeze of recruitment while staﬀ development plans (SDPs) lack future visions for developing capacity in the water and sanitation fields at professional levels.

The land tenure system in Solomon Islands is such that most land is customary-owned. Land is divided according to each clan and family and consent must be obtained before accessing or entering into development. Water resources is therefore tied to land. This makes it difficult to distinguish between land and water ownership. To date landowners use water as a means to negotiate with water authorities and government when it comes to water supply payments – whether water is state-owned is a governance issue yet to be settled. The above issues have begun to be addressed through the cross-sectoral planning and management initiatives of the GEF Pacifc IWRM Project. Needs still exist and have been identified within a Ridge to Reef context. These include establishing a monitoring programme for pollution and nutrients entering Honiara Adjacent Coastal water; identifying pollution and nutrient sources and environmental impact and; establishing institutional and Civil Society awareness and capacity outreach. 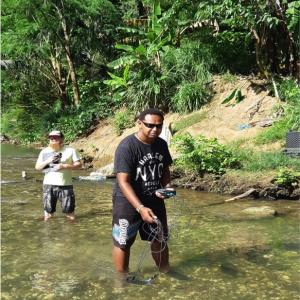 The project aims to improve the management of forests in the Solomon Islands by integrating biodiversity conservation, land degradation, sustainable forest management (SFM) and climate change issues into policymaking at the national level and livelihood activities of local communities living in and around forests. It includes activities targeted on existing and new protected areas that will be the focus of the project (140,000ha and 100,000 ha respectively), as well as capacity building and institutional development at the national level.