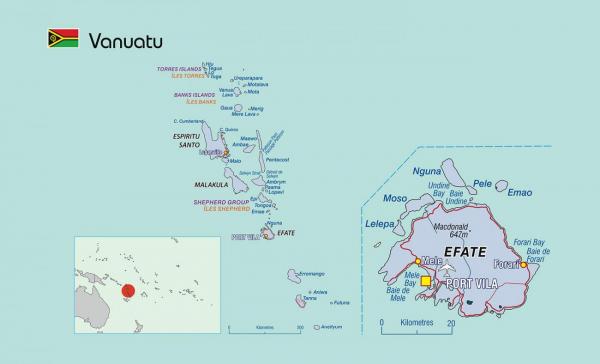 The archipelago of Vanuatu has about 74 populated islands. 81% of the population live in rural areas and are mainly occupied in subsistence and small holder farming with the remaining 19% of the population living in the two main urban areas of Port Vila on Efate and Luganville on Santo. The high urban growth is resulting in the rapid development of fringing settlements not serviced by proper roads, electricity, water and sanitation. Environmental issues include the lack of reliable potable water source, deforestation and sedimentation of coastal waters and fresh watercourses.

Vanuatu has abundant rainfall with numerous rivers and springs, and water from the aquifers is generally of very good quality requiring no treatment for consumption purposes. Water is sourced primarily from surface water in catchments and from groundwater wells and bores, and is chlorinated for safety reasons. The average rainfall varies from 2800mm per annum in the north, to only 1900mm per annum in the southern islands.

A National Water Committee was established in 1994 to provide a forum for information exchange on key issues in the water sector, including national policy issues. The high level committee continues and has been an important conduit to consider major issues and projects such as the Rural Water Supply Master Plan, designation of water protection zones
in and adjoining catchments, and draft water resources legislation currently before Parliament.

A National Water Resource Strategy 2008-2018, was created as a way forward for Vanuatu to enact the principles of IWRM and develop a National IWRM Plan for the water sector. The strategy calls for Provinces to develop IWRM Master Plans appropriate to the local context. At the national level these will be overseen by the National Water Resource Advisory Committee (NWRAC).

Land ownership issues and conﬂict are dominant in the culture and also relate to the ownership of water, creating difficulties in many areas of water management. Difficulties lie in gaining access to water for supply, protecting water resources such as catchments, infrastructure maintenance and negotiating national projects such as hydropower generation.

Vanuatu’s IWRM Diagnostic Report highlighted the country’s current water situation including existing water sources, vulnerabilities, uses, current management eﬀorts, and existing gaps. In areas of high density use there is a decline in groundwater levels coupled with contamination from septic seepage and agricultural wastes. Septic tanks in high density areas are also causing a decline in coastal water quality. These point sources of pollution go unchecked as do many of the industrial and commercial producers of waste. These issues are compacted by poorly maintained information on water resources, this being largely held sectorally and not shared among policy makers, managers and users.

In addition to these issues, the islands natural vulnerabilities pose an additional challenge to water management. Vanuatu
is the most natural disaster prone country in the South Pacific with disasters including volcanic eruptions, earthquakes, cyclones, and isolated droughts and ﬂoods. It is also indicated that climate change will increase water vulnerability over the next several decades.

The above issues have begun to be addressed through the cross-sectoral planning and management initiatives of the GEF Pacifc IWRM Project. Needs still exist and have been identified within a Ridge to Reef context. These include addressing water resources issues in and around the urban center of Port Villa by replicating lessons learned through the IWRM Project in Sarakata Catchment. Issues include strengthening coordination in support of the development an implementation of the Tagabe Catchment R2R Management Plan; Strengthening the capacity for participatory monitoring and evaluation of the Tagabe Catchment R2R Management Plan and; establishing partnerships for sustainable coastal area development. 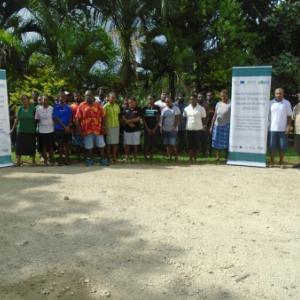 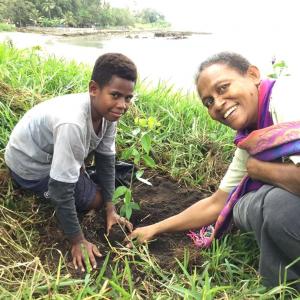 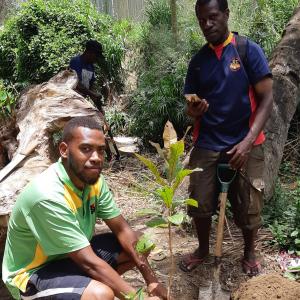 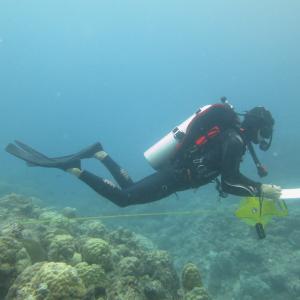 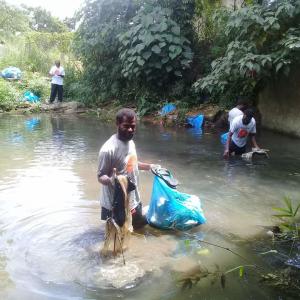