The Pacific R2R International Waters Ridge to Reef Project (IW R2R Project) began rolling out a 6-step science-to-policy process following the RSC approval in August 2019.  Several countries were not able to follow and implement the full process, therefore a ‘modified’ version was further prepared along with Regional guidelines to implement the science-policy framework. The guidelines were prepared as “one-stop shop” for stakeholders to understand and use the R2R science-policy interface for their sustainable governance and management of their resources.

“The identification and prioritisation of these environmental threats, and therefore agreement on realistic and practical management responses, are often based on conjecture and sometimes speculations – not science or evidence based,” he continued.

“Step 4 of the R2R science-policy process relates to the spatial prioritization procedures required to identify and prioritize specific threats or areas for ICM/ IWRM conservation actions.  This approach maximises existing data and stakeholder input and reduces the amount of time and resources needed to characterise priority areas. The procedures recognise the importance of traditional and cultural knowledge, as well, practical and relevant experiences from prominent resource users in communities residing within those ecosystems. The results of Step 4 will therefore inform policy discussions in the preparation of the State of the Coast Report or State of the Environment Report, the Strategic Action Plan and Strategic Action Framework,” he concluded.

Generally, the IW R2R Science to Policy Theory of Change provides for the identification and characterisation of priority areas based on socio-political and environmental factors, and further informed by spatial modelling that identifies priority areas or “hot-spots” nationally, locally, or at site level, noting that the latter may not be useful in small atoll countries where priority areas are known and documented. Nonetheless, evidence based principle requires science informing policies decisions and preparation of policies and legislations.

The information gathered produces a detailed assessment of the ecological state of an area, human activities and the main risks, and generate policy options for interventions based on collated data and stakeholder input. Thematic maps are generated to assist national stakeholders in decision-making. These maps and analysed data will be compiled into a national State of the Coast Report that provides communities and decision makers a snapshot view of environmental health and management options. All the above knowledge is used to support formulation of national ICM/ IWRM reforms and investment plans.

With the oversight by the Regional Programme Coordination Unit based at the Pacific Community (SPC), this work will be delivered by the R2R Science Team comprising of the Regional Programme Coordinator and Science Interns, and Consultants from the University of the South Pacific lead by Dr. Hilda Sakiti-Waqa,  Dr. Antoine N’Yeurt and Mr. Nick Metherall. 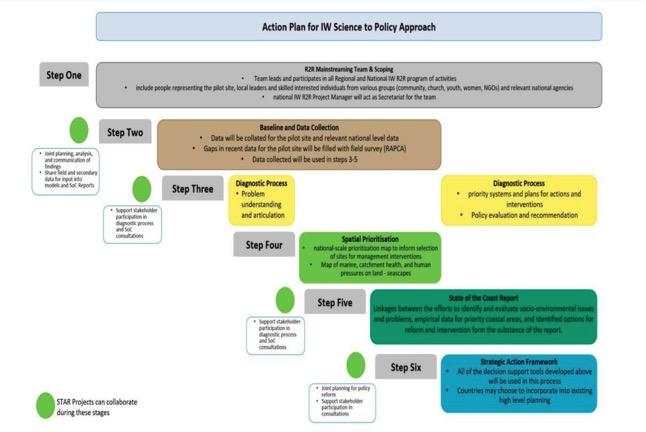