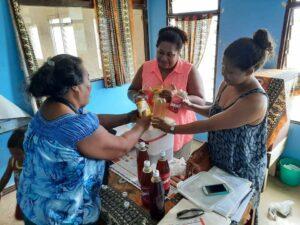 The current COVID border restrictions have increased logistics and transportation cost challenges for Marama Niu in accessing their regular supply of coconut syrup from Tuvalu. A joint effort by the Pacific Island Farmers Organisation Network (PIFON)[2], in partnership with the Pacific Community’s (SPC) Ridge to Reef (R2R) project and Pacific Organic and Ethical Trade Community (POETCom)[3] programme, provided technical and business support to Marama Niu in re-orienting the value chain to domestic suppliers.

This resulted in the introduction of a local Rabi[4] coconut syrup producer named Avi Pita to Kylie and Jojina of Marama Niu, in September 2020, for potential business collaboration. This face to face approach was critical to building the trust, confidence and initiating the business relationship between the two value chain actors while creating a story of sustainability, partnership, and the Rabi community ownership around coconut syrup.

Coconut syrup, locally known as Kaimamai, is produced by boiling down the sap of the coconut blossom, or fresh Toddy. Whilst harvesting fresh toddy is regarded as male activity, coconut syrup production is a traditional activity carried out by women. There are currently 25 fresh toddy producers in the four village communities on the island, but only two women produce value added coconut syrup.

However, due to cultural, economic and infrastructural factors, this traditional practice of producing coconut syrup may soon disappear on the island. The partnership with Marama Niu offers an opportunity to reverse this trend, while joining current environmental preservation efforts. In fact, initiatives aiming at protecting and restoring the environment of Rabi Island at broader level were initiated by the Fiji Ministry of Agriculture and Ministry of Forestry and SPC LRD under the R2R Project in 2020. Activities implemented so far include a land use survey, tree planting, establishment of a coconut seed nursey, and the successful establishment of the Rabi Organic Participatory Guarantee group.

The partnership between Marama Niu and Avi serves as a pilot initiative enabling partners, and VC actors, to gain a deeper understanding of the value chain challenges and opportunities. Dissensus on the retail cost of the coconut syrup among other potential producers; gender issues as bottleneck to value chain development (Box 1); high cost of transport and logistics in general; competitive products obtained from fresh toddy; competing income generating activities; natural disasters are few of the challenges identified.

While partners work to unlock the barriers to Value Chain development and strengthening, they are looking forward to witnessing the potential benefits of an increased coconut syrup production with the following additional benefits:

[1] Interesting is the nutritional aspect of the Coconut Syrup which seems to have a Lower Glycemic Index compared to other sweeteners (e.g. sugar, honey etc).

[2] Under the Pacific Agribusiness Research in Development Initiative Phase 2.

[3] Under the UNDP funded Ridge to Reef (R2R) Project.

[4] Rabi is home to the displace Banaban people from Kiribati. Since 1900, their original homeland, Banaba Island, had been gradually degraded by extensive phosphate mining by the British. At the end of the World War II, the Banabans, were relocated to Rabi, as decades of mining on Banaba Island left it uninhabitable. Some have since returned, but the majority have remained on Rabi or elsewhere in Fiji, maintaining their cultural and political links to their homeland. The islanders received formal Fijian citizenship in 2005, and today almost five thousand Banabans live on Rabi. On 15th December 2020, the Banabans commemorated 75 years’ anniversary of their arrival in Rabi.