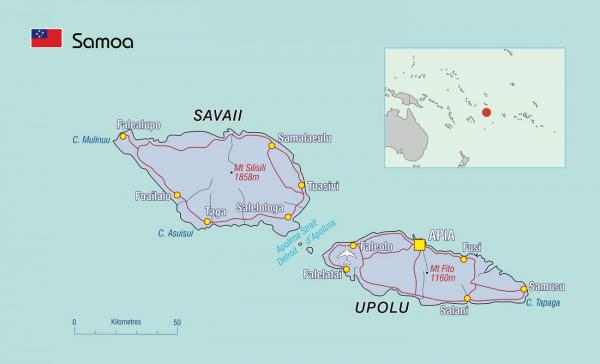 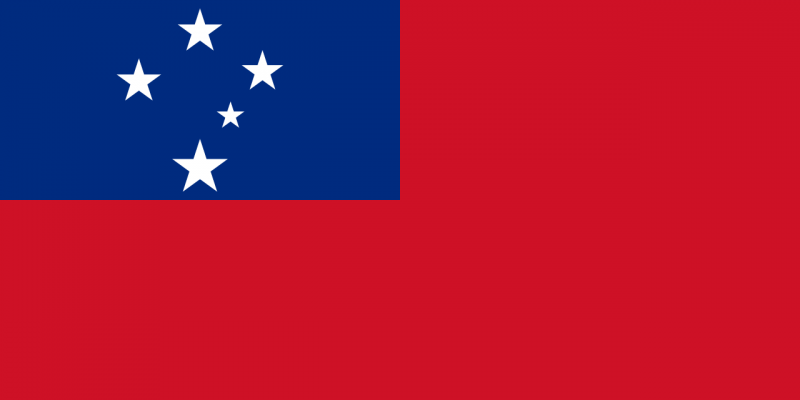 Samoa consists of two main islands, Upolu and Savaii, and seven islets. It is rugged and mountainous, with about 40 percent of Upolu and 50 percent of Savaii characterized by steep slopes descending from volcanic crests. The interior of both main islands are still covered with montane forests, and in the case of the highest altitudes on Savaii, cloud forest. West Savaii and north-west Upolu are almost devoid of surface streams and their associated incised river channels, with uniform terrain and gentler slopes, allowing rapid rainfall infiltration and the development of fresh groundwater lenses.

Of the population of 180,000 people, approximately two thirds live on Upolu, and of them approximately 40,000 live in the capital Apia. Not surprisingly the land use in and around Apia is greatly modified from its natural state, with urban development in the coastal plain and low foothills, and periurban development and commercial agriculture in the watersheds. During a consultative Hot Spot Analysis, stakeholders identified the Apia Catchment as the site for the IWRM demonstration project because of the severe degradation and serious water quality issues. Water supply in northern, eastern and southern Upolu is from surface water intakes, where as that for western Upolu is from groundwater. Water shortages are reported during the dry season, especially during extended dry periods associated with the ENSO, in the Apia area on Upolu.

The Vaisagano Catchment behind Apia provides water for 3 of the 5 hydropower plants in the country. The lack of natural water storage results in these catchments reaching low ﬂow levels within several weeks. Conversely the lack of storage also results in rapid ﬂooding events, with times to peak estimated at less than 3 hours for cyclone and tropical storm associated rainfall events. Flooding in Apia is a recurrent problem. Water and energy demand is increasing with population wealth, and despite considerable eﬀort in water demand management measures, including metering, leakage detection and repair, tariﬀ incentives and conservation awareness campaigns, per capita consumption of water and power are predicted to rise.

With increasing population and landuse pressures, especially around Apia, land degradation in the catchments is a concern. Inadequate wastewater management and solid waste management in the lower catchments, and increasing vegetation clearance due to urban expansion and cash cropping in the upper catchments not only reduces low ﬂows and increases ﬂash run-oﬀ, but also is resulting in perceived increases in erosion, sediment loading and nutrient enrichment of the water courses. In the uplands of Upolu the northern slopes are continuing to serve the economic expansion of Apia, whilst the southern coastal area is enjoying an expansion of the tourism industry. Collectively these increasing pressures are perceived to be impacting upon public water quality, public health and causing degradation of environmental habitat.

The Apia Catchment area was considered an appropriate pilot project given its national and regional significance, relative to its size. The issues present in this catchment impact on all interrelated sub-sectors of the water sector. They have implications for the urban water supply, public power supply, agricultural and recreational activities (eco- tourism), bio-diversity, land use planning as well as fsheries and marine eco-systems.

The integrated approach in water resources management is consistent with integrated principles already being practiced in urban planning and the tourism industry. The above issues have begun to be addressed through the cross-sectoral planning and management initiatives of the GEF Pacifc IWRM Project. Needs still exist and have been identified within a Ridge to Reef context. These needs include enhancing access to information regarding the status and locations of vulnerable coastal areas; and strengthened linkages between watershed management plans and coastal zone assessments. It also includes increasing capacity for eﬀective environmental stress reduction practices and sustainable watershed management in Apia. 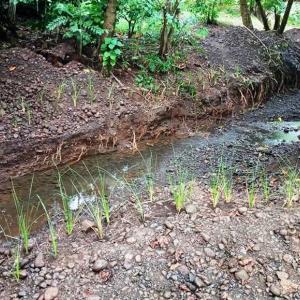 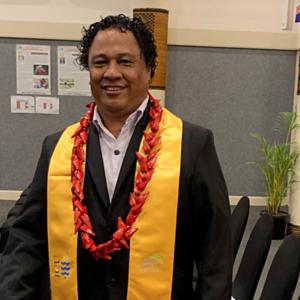 The predicted effects of climate change on Samoa include: i) increased frequency and severity of extreme rainfall events; ii) increased frequency and duration of droughts; iii) rising sea levels; and iv) increased frequency of extreme wind events such as gusts and cyclones. The problem that the proposed LDCF project seeks to address is that Climate change is expected to result in losses to lives, livelihoods and assets for local communities in Samoa. The solutions is to adopt an economy-wide approach to climate change adaptation in Samoa, allowing for increased integration of climate change adaptation and disaster risk management into national development planning and programming across all sectors. Additionally, the climate resilience of local communities – including their physical assets and livelihoods – must be strengthened.

Outcome 1.1. By 2017 the most vulnerable communities across the PICTs are more resilient and select government agencies, civil society organizations and communities have enhanced capacity to apply integrated approaches to environmental management, climate change adaptation/mitigation, and disaster risk management.

Outcome 5. Countries are able to reduce the likelihood of conflict, and lower the risk of natural disasters, including from climate change.

Output 3.1.2. Strengthened national capacity to develop and upgrade the national environmental policy and the implementation of relevant gender and climate change policy responses.

Output 3.2.4. Strengthened government and UN planning and coordination of humanitarian responses, including post disaster employment and livelihood options for women and men.