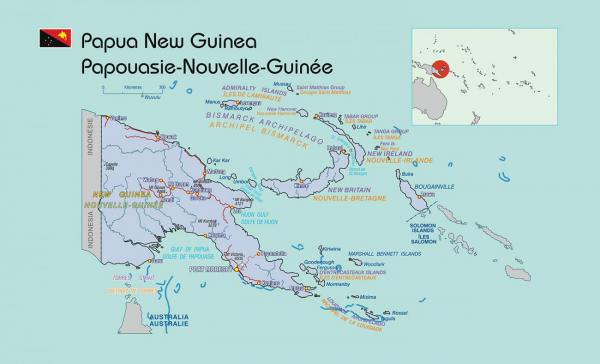 Located south of the equator in the South-western Pacifc, PNG is the largest and most populous Pacifc Island nation. It consists of the eastern half of the island of New Guinea, several large high volcanic islands and numerous high volcanic islands and coral atolls. Its diverse geography gives rise to an equally diverse range of ecosystems which accommodate a wide variety of ﬂora and fauna making up 5% of the world’s biodiversity.

Its population of 5.8 million people is also diverse in ethnicity, language, custom and culture. Eighty fve percent of the population live in the rural areas on a subsistence lifestyle while the rest live in urban areas either as employees in the formal sector or engaged in a range of informal sector income earning activities such as market gardening, small livestock husbandry and other service based business activities. A large proportion of urban dwellers are unemployed and rely on
relatives for support.

The country has a substantial amount of freshwater resources including springs, creeks, rivers, lakes, wetlands and groundwater. The main water uses are domestic consumption, hydropower generation and a wide range of industrial uses. In the rural areas the main sources of potable water are rainwater tanks, shallow hand-dug wells, springs, creeks and rivers.

Only 33% of the rural population have access to improved water supply systems, a major factor in the 2009 cholera outbreak that aﬀected 14,000 people, while the rest consume rainwater contained in tanks or water obtained directly from the source. In the urban areas 60% of the population have access to treated water reticulated to their households while the rest who reside in the peri-urban areas have to make do with water delivered through standpipes.

The story with sanitation is not as good. In the rural areas three modes of human waste disposal are used: septic toilets, pit toilets and direct defecation into the environment. Fiftyfive percent of the population do not have access to safe sanitation services. Contaminated drinking water, lack of proper sanitation services and poor personal hygiene contribute to the high incidence of water and food borne diseases such as diarrhoea, dysentery and typhoid. Diarrhoea is the seventh biggest killer in PNG. Two of the main reasons for the above situation are the lack of coordination in the water supply and sanitation sector and inadequate funding by the government.

Water resources availability in terms of quantity and quality is coming under increasing threat from the pressure from rapid population growth as well as runoﬀ and point source pollutant laden discharges from mining, logging, agriculture, infrastructure development and industrial processing, entering surface and groundwater bodies. While existing regulatory controls are in place to minimise these impacts, better monitoring and compliance arrangements are required to regulate these activities.

Due to its position at the intersection of the stable Australian plate and the mobile Pacific plate, PNG is geologically young and dynamic with high seismic and volcanic activity. Its northern portion forms a part of the so called “Pacific Ring of fire” which makes the country prone to volcanic eruptions, earthquakes, landslides and tsunamis. In addition, with one of the wettest climates in the world, ﬂoods occur annually with magnitudes diﬀering from one year to another. Even with its very wet overall climate, the topography of the country is such that there are areas which experience distinct dry seasons where droughts can develop during extended dry seasons. Climate change and variability have increased the country’s vulnerability to sea level rise, tropical storms, tidal surges and saline intrusion.

In order to safeguard the availability of water with respect to quantity and quality to maintain ecological integrity, cater for natural and anthropogenic water uses as well as minimise impacts arising from ﬂoods, droughts and climate change, there is an urgent need to apply integrated water resources management involving all stakeholders and focusing on catchment units. Several institutional, legislative, operational, strategic, capacity, public consciousness and resource related barriers have been identified for appropriate treatment in order to achieve eﬀective IWRM in PNG.

Component 1 will be implemented by CEPA and focuses on supporting management capabilities of the PNG State to oversee Protected Area Management through supporting the transition from DEC to CEPA, implementing the CEPA Act of May 2014,as well as the operationalization and implementation of the draft PNG Policy on protected Areas (PNG PAP), component 1 focuses on four outputs:

The Varirata National Park (VNP) will be established as a national best practice example for PA management under CEPA leadership, and used as a testing ground for relevant implementation instruments for PA management. As such a biodiversity monitoring, law enforcement and other protocols, standards and guidance will be developed and tested with field staff. The expansion of the VNP to link into the larger Sogeri Plateau complex will be initiated, establishing a sizable protected area with visible ecosystem service protection.

Sedimentation and siltation rates of key water reservoirs supplying the capital Port Moresby will be improved. Additionally livelihoods improvements for local land owners will be achieved and benefit sharing opportunities and mechanisms as set out in the PNG’s Protected Areas Policy (PNG PAP) will be tested at this site.

UNDP Strategic Plan Environment and Sustainable Development Primary Outcome:
1. Growth and development are inclusive and sustainable incorporating productive capacities that create employment and livelihoods for the poor and exclude.

Outcome Indicator:
1.5. Hectares of land that are managed sustainably under a conservation, sustainable use or access and benefits sharing regime.

Expected CP Output(s):
Enhanced institutional and communities’ capacity for environmental conservation and use of naturalresources