Niue is a small elevated coral outcrop approximately 2,400km northeast of New Zealand with a fringing coral reef. It consists of two terraces with the upper terrace forming the bulk of the island. It is believed to be the largest coral atoll in the world, with 13 villages spread around the lower coastal terrace. The population is a little over 1,000 persons and the economy suﬀers from the typical Pacific island problems of geographic isolation, few resources, and a small population.
There is no surface runoﬀ in Niue in the form of rivers, streams, and lakes. As such, water for residential and commercial
consumption can only be sourced from the underground water lens, supplemented by the collection of rainwater at the village or household level. The water lens is recharged through rainfall which permeates through the predominantly limestone soil profile to recharge the groundwater lens. This means that any discharges whether through human waste, agriculture or industry has great potential to contaminate the water lens if proper measures are not taken to improve management of discharges from land based activities.

The water quality of the lens is potable and it is piped untreated to all villages. The Government meets all costs for pumping and distribution of water. Attempts to introduce a user pay system have up till now been decline by government. Approximately 85% of water that is pumped from the groundwater lens is used for domestic use, 10% for agricultural use and 5 % for commercial and industrial usage. Water pumped from reservoirs to household storages is not treated, with households deciding themselves whether to treat or boil the water.

The groundwater is prone to contamination due to the very porous coral aquifer. Septic tanks are the most common way of treatment for all domestic and tourism wastewater on the island. The exceptions are piggeries and agricultural wastewater. Currently there is no secondary treatment for sludge from emptied septic tanks nor is there any specific waste disposal procedure though there are plans for a main dump to be constructed at the southern end of the island. A study carried out by SOPAC on coastal water quality in 2003, originally initiated due to fish poisoning outbreaks and fish deaths, confirmed high nitrate and phosphate concentrations. This is believed to have been caused by inadequate wastewater treatment primarily from septic tanks draining into the groundwater regime. The survey highlights the vulnerability of the islands water resources to any land activities, and the close link between land and catchment activities and coastal zone impacts.

On-going reconstruction work after Cyclone Heta required movement to the higher terrace known as the watershed. Here several government facilities and private residential housing are constructed, closer to the catchment area. This poses high risks of pollution to the groundwater from domestic and agricultural wastes. With this trend of movement several household activities such as taro plantations and piggeries are also within the vicinity of the houses. Through consultative processes Alofi Town was identified as a high priority site because it is the population centre and associated development in the upper terrace, if poorly managed, could pose a threat to the groundwater supply.

The above issues have begun to be addressed through the cross-sectoral planning and management initiatives of the GEF Pacifc IWRM Project. Needs still exist and have been identified within a Ridge to Reef context. These include building ecosystem and climate change resilience through national actions to strengthen the enabling environment and monitoring capacity for water systems; enhancing coastal and groundwater protection through targeted reductions in land-based contaminants and; increasing information management and community awareness in support of national Integrated Coastal Management. 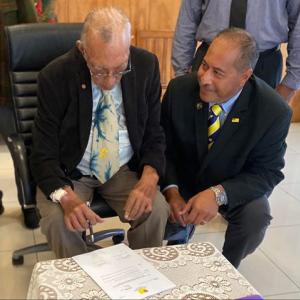