The Federated States of Micronesia consist of four major island groups with over 600 islands in the northern Pacifc. These vary geographically from high mountainous islands to low lying coral atoll and volcanic outcroppings on Pohnpei, Kosrae and Chuuk.

About 60% of water resources in FSM exist as surface water in the form of small, intermittent streams that drain catchments areas of limited aerial extent and are dry for about 20% of the year. The topography in the stream basins is not conducive to the construction of economical dams and requires extensive and costly treatment. The remaining 40% of the islands’ water resources exist as groundwater. Many households use roof catchments and are particularly prevalent in the outer islands where there is no piped water.

All of the four focal islands have coastal mangrove fringes and development is largely focused on the coast with minimal
interior development. The natural vegetative cover is dense on all islands and has not generally been disrupted for intensive agriculture use.

Whether planned or fortuitous, this has protected watersheds, helping to reduce the rapid runoﬀ and maintaining a reasonable recharge opportunity for the aquifers that are important to each State for a portion of its water supply. Only limited areas are provided with sewerage systems and large numbers of household still have pit latrines or other unhygienic excreta disposal systems. Combined with frequent rainfall events this can lead to contaminants entering the coastal ecosystems as well as being a critical public health threat.

Considerable attention is required for planned drainage in the developed areas to protect the road pavement and foothill areas from land erosion and ﬂooding. There are several poorly constructed and maintained dumpsites throughout the FSM and dumping of solid waste in particular human excreta is considered one of the foremost environmental health problems.

Kosrae’s Coastal Environment provides its best and most eﬀective defence against climate related hazards. The wellbeing of coastal environment is dependent upon the degree that anthropogenic activities impact on the area from
Ridge through to Reef. Preservation of catchments and in particular upland areas is vital to the maintenance of quality surface and groundwater inﬂows to the coast areas. Likewise the maintenance of a quality coastal environment oﬀers improved sustainability for lagoonal and reef resources vital to food security.

The need to preserve and protect Kosrae’s Coastal Environment has resulted in the development of a comprehensive Shoreline Management Plan which has been endorsed by the Kosrae Government. The plan recommends the staged and planned relocation of coastal communities to upland areas which are currently undisturbed. This will have major impact on land use and its associated impacts on waterways.

Some of the above issues have begun to be addressed through the cross-sectoral planning and management initiatives of the GEF Pacifc IWRM Project. Needs still exist and have been identifed within a Ridge to Reef context.
These include improving land use practices; reducing pathogen and nutrient contamination of ground and coastal
waters; assessing Kosrae’s freshwater resources; establishing community based management of waterways and; enhancing community and national level awareness of best practice in sustainable management. 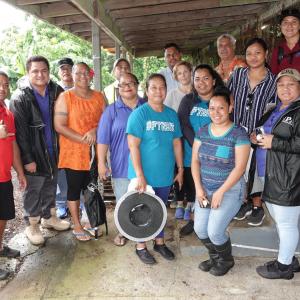 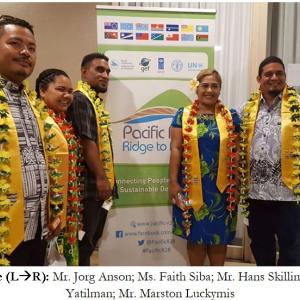